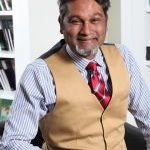 Dhesigen Naidoo is a leader, a scientist and an activist for social change. He has, as CEO, led the Water Research Commission(WRC), South Africa’s dedicated national water and sanitation Innovation, Research and Development Agency since 2011. He has previously served in senior positions in the South African national government and South African universities having begun his career as a medical scientist in a specialist paediatric hospital. He is also a Councillor of the National Advisory Council on Innovation and a Fellow of the Mapangubwe Institute for Strategic Reflection.