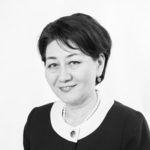 Dr. Oyun Sanjaasuren is the Director of External Affairs of Green Climate Fund, the world’s largest dedicated fund helping developing countries to counter climate change.  Dr. Oyun served as the first President of the United Nations Environment Assembly, the Governing Body of UN Environment (2014-2016), and has been an active advocate for sustainable development, climate change and water security. During 2016-2018, she served as Chair of the Global Water Partnership, a multi stakeholder platform of institutional partners in more than 180 countries dedicated to improving water security. Oyun is a member of advisory boards of a number of global initiatives including the Word Economic Forum Global Agenda Council on water security, Varieties of Democracy, the Future Earth and Green Growth Knowledge Platform.  Previously, Oyun served five consecutive terms as a Member of Parliament in Mongolia (1999-2016), including as Minister of Environment and Green Development (2012-2014) and Minister of Foreign Affairs (2007-2008). Under her leadership, the Ministry of Environment and Green Development became one of Mongolia’s core ministries while the parliament approved the country’s first green development strategy.  A geochemist by training, with a Ph.D in Earth Sciences from University of Cambridge, Dr. Oyun’s active public life extends beyond environmental protection to include advancing civil and social rights. She is the founding member of Women Corporate Directors in Mongolia and Chair of the Special Olympics Mongolia. She also a founder of the Zorig Foundation, a leading Mongolian NGO that advances democracy and supports youth leadership and education.