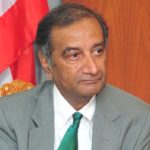 Ravi Narayanan is currently Chair of the Asia Pacific Water Forum whose secretariat is in Tokyo, Japan, International Mentor to the Japan Water Forum and Chair of the Water Integrity Network, Berlin. He was a member of the World Panel on Financing Water Infrastructure (the Camdessus Panel) and the UN Millennium Task Force on Water and Sanitation. He is a life member of the Norwegian Water Academy. At the national level he was a member of the Technical Expert Group set up by the Government of India to assess its national drinking water mission and a member of the 12th Five Year Plan Working Group on Water and Sanitation. He is an Associate of the National Institute of Advanced Studies in India. With degrees in Physics from Delhi University and Engineering from Cambridge University, Ravi began his career in the corporate sector as a design engineer with General Electric Company in the UK in 1966. Since then he held positions in production, marketing and general management in the manufacturing sector. In the not for profit sector, Ravi was Asia Director at ActionAid and then Chief Executive of WaterAid. UK. He was an advisor to the Arghyam Foundation which was set up in India to work on sustainable water and sanitation issues in India. He was awarded an honorary CBE by the UK Government in 2009 for water and sanitation services to poor communities in Africa and South Asia.